Challenge No.7 – Repair a quantum teleporter

Tips for using this guide: This guide is meant to be self-guided for students above grade 8, though might be of interest to younger students who have strong interests in the subject. Students may also be interested in the quantum circuit challenge, instructions for which are available – .pdf and .doc.

Quantum physics is the science of the very small, or the very cold. Quantum physics is different than everything else – and in fact, it’s downright weird. Quantum physics has had scientists scratching their heads for a long time. Now though, we are coming to understand the quantum world like never before, and quantum weirdness is being put to use to build powerful computers, send secret messages, and soon, to discover life saving drugs and build super strong materials.

One of the exciting uses for quantum weirdness is teleportation – moving chunks of quantumness from one place to another without ever really passing in between. On this page, you’ll learn about quantum physics, and then use your knowledge to repair a quantum teleporter!

Questions? Let us know – Your questions will be answered by UBC quantum physicists! You can contact us by leaving a comment on this website, emailing us, or reaching out on our social media channels @ubcphasoutreach.

Check out “Ant-Man” Paul Rudd vs Stephen Hawking in quantum chess – remember that anyone can quantum!

Here is an overview of quantum teleportation from Minute Physics:

Books, memes and videos are all examples of information. In fact we are surrounded by so much information that we sometimes say we live in the information age.

The information stored in books, memes and videos can be recorded using bits. Bits are little objects that can be one of two things, like a 0 or a 1. We can write other kinds of information using bits by using a sort of dictionary, for example we might say the letter A will be 00001, B will be 00010, C will be 00011,… and so on, where we choose a different 5 bits for each letter.

Explore and experiment: You can use the idea of “bits” to create your own meme! Try it out in the program below. You can take a screenshot and share it with us using the submission form at the bottom of the page. Watch this video to see an example being made.

Dictionary for switching from letters to binary:

You can also view the project in a separate window here.

One thing that makes qubits different is that they can be one of more than two things. For example, while a bit could be two things, like an arrow pointing up or down, a qubit is like an arrow that points in any direction. This is just one of the ways qubits are different than bits though – check out the next section to explore more!

Check out these videos to learn more about qubits and how they are used to build quantum computers:

Where to find a qubit

Check out the video on the right for more on how qubits are being built today.

To understand qubits better, we’ll let you test out how they work using the simulator below. In the simulator you can send out qubits. The qubits start out as one of the up, down, left or right states. Then, you can measure your qubit using a magnet. To measure your qubit means trying to see which way it is pointing. A magnet can be placed two ways

You can test out how quantum measurement works for yourself using the simulator on the right. Also check out the video on the left for an example.

The way we can change the state of a qubit is using a quantum gate. We will just be using three quantum gates, called X, Z and H (there are others!). Find out what they do to quantum states by testing it out for yourself using the simulator on the right.

To get you started, try to add gates to make the arrow point in all four directions – up, down, left and right. What does the X gate do to the arrow? How about the Z gate? Or if you’d like to explore quantum gates in detail, take our quantum circuit challenge (in .pdf and .doc).

The blocks that say “measure” on them do quantum measurements, just like the magnets in the last section. You can choose to look at your qubit with a left-right magnet or an up-down magnet by dragging the measure blocks.

You can also learn more about how quantum gates are used in quantum computers by checking out this video: Quantum Computers Explained – Limits of Human Technology. Note that the gates part is from 4:37 to 5:20.

If you’ve ever watched Star Trek, you might have wondered if teleportation is really possible.

While it will probably always be impossible to teleport something big like a human, in the quantum world teleportation is real. In fact, qubits are nowadays routinely teleported between cities. In this activity you’ll learn a little bit more about quantum gates and about entanglement, and then use your knowledge to repair a quantum teleporter!

The key ingredient to doing quantum teleportation is entanglement. Entanglement is a property two qubits can have. We could have two up qubits, or two left qubits, or an up and left qubit for example. But, there are actually more possibilities than just having each qubit point in one direction. When the two qubits cannot be described by saying each of them is pointing in one direction, we say the qubits are entangled.

That means that if we measure the two qubits, we’ll get either both up or both down, with a 50-50 chance. In the Scratch simulator below, the two qubits start out in the Bell state. Test it out for yourself with the Scratch simulator here. Try to have the measurements at the end always come out the same, and then make it so they always come out different.

To test it out, try to make it so that the bottom qubit gets flipped when the top qubit is a down state.

As a challenge, try to have the bottom qubit get flipped but only 50% of the time.

You’re now equipped and ready to repair the quantum teleporter!

In the simulator below, you have a project with the first two steps working. You’ll need to understand which quantum gates to add to fix up the qubit correctly. For tips on getting started, check out the video on the right.

Here’s a quick overview of teleportation and how to repair your own:

If you have any questions, let us know! You can reach us using the comments section at the end of this page, send us an email at outreach@phas.ubc.ca, or message us on our Instagram post for this particular challenge. We look forward to hearing from you soon!

Your questions will be answered by… 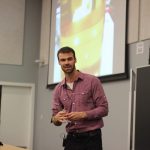 Alex is a PhD student at the University of British Columbia, where his job is to think about quantum physics and what would happen if you fell inside of a black hole. Alex loves all kinds of science, and loves sharing science with anyone who will listen! 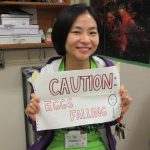 Theresa works at UBC and runs the Physics & Astronomy Outreach Program with a team of very awesome physicists & astronomers! She likes to think of ways to make science fun and exciting (and very hands-on).

We’d love to hear about your creative approaches! You can share by using the submission form below, or by tagging #PHASTeleporter @UBCphasoutreach on Instagram.

Do you have any questions? Please leave your questions below. Our comments section is moderated and we will review questions submitted to the comments daily.